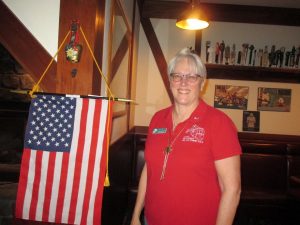 Susan joined the Marine Corps in 1970 after graduating from college. She reported to Quantico in October of 1970, attending Officer Candidate School, and at the end was commissioned a 2nd Lieutenant. In January of 1971, she attended The Basic School. She was assigned a 3402 MOS reporting to Camp Pendleton as a Disbursing Officer. She worked first at Schools Battalion, paying those Marines just out of Boot Camp. Later she was assigned to the Separation Center, paying those Marines returning from Vietnam on their way home. While at Camp Pendleton, she was promoted to 1st Lieutenant.

After 3 years at Camp Pendleton, she was transferred to Kansas City, Missouri. While there, she worked in the Automated Services Center, working as part of the team that was automating Reserve pay. She then worked at the Marine Corps Finance Center, paying those Marines on assignment in the 12th Marine Corps District.

While in Kansas City, she was promoted to Captain. That was a time when the Marine Corps was starting to integrate men and women. She received a phone call one day – Women Marines would now be in the overseas rotation – and she received orders to 3rd Force Service Support Group, Okinawa. When she went to receive the necessary shots from the Air Force Base that provided our medical needs, they were unwilling to give her the necessary shots, because ‘Group is a combat deployable unit, and the Marine Corps does not send women to combat deployable units’. They insisted she must be going to Base, not Group. She had to bring in a copy of her orders to prove to them she was going to Group. After that they gave her the shots she needed. Many shots later including Bubonic Plague and Yellow Fever, she was off to Okinawa, where she was assigned to 3rd Marine Division Headquarters as the Disbursing Officer. She reported to Okinawa in one set of uniforms, and while she was there, our uniforms changed, and she left in a different set of uniforms and utilities. Also, while in Okinawa, she had to qualify with the 45 pistol for the first time.

She then reported to Marine Corps Logistics Base, Barstow California as the Disbursing Officer, where she met her husband, the Officer running the Data Center. After their marriage, they decided to leave the Marine Corps, as he had orders to Okinawa, and she was on her way to Washington DC. She left active duty in early 1982, and has been working as a Librarian/Branch Manager for the last 30 years. She is still married to the man she met in Barstow, now going on 35 years. She earned the National Defense Ribbon, Meritorious Unit Citation, Sea and Service Ribbon, and Pistol Sharpshooter Badge.

During her time in the Marine Corps, she saw many changes. Our PFT changed from including the ‘Jump and Reach’, shuttle run, 600 yard run, to including the ‘flexed arm hang’ and 1 ½ mile run. She went from wearing a green and white striped dress as her summer uniform to wearing a green and white striped skirt and blouse, to a dark green skirt and short sleeve khaki blouse. Her winter uniform changed from a dark green skirt, light green shirt, and Green half tie to the long sleeve khaki shirt with green tab. Trousers and wooly pullys were introduced. Her utilities changed from dark blue pants, light blue shirt, dark blue sweater to solid green utilities, to jungle print utilities. Our Dress Blue jacket changed slightly.

While on active duty, she played basketball and volleyball for the Marine Corps. She earned her first Masters Degree while on active duty, and used the GI Bill to receive her second Masters degree. She loved her time in the Marine Corps, and will be forever grateful for the opportunities provided, and the camaraderie which still exists today, as a member of the Woman Marine Association, and the CA-3 Greater San Francisco Bay Area Chapter.