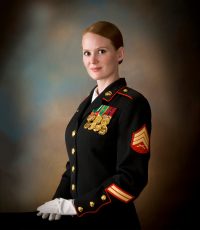 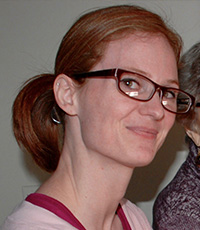 Molly signed the dotted line on her 17th birthday, with her parents’ signed consent, and graduated from high school a semester early. She was in boot camp from 9 February through 7 May 2004, with Plt 4013, Series 4012, Oscar Co, 4th Bn . After graduating, she returned home to participate in her high school graduation ceremony — in dress blues, of course! She then checked in to Headquarters Battalion, 1st Marine Division, 17 August 2004 (3 days before turning 18), and one month later, to the day, was in Iraq. Assigned as an 0151 Administrative Clerk, she processed casualty reports which allowed next-of-kin to be notified when their loved one was wounded or killed in action. She also processed award nominations, and had the honor of working on two Medal of Honor nominations. After returning to the states, she processed separation paperwork for Marines who were at the end of their contracts.

She reenlisted in 2008 and executed a lat-move to become a Career Planner (MOS was 8421, 0143, or 4821 depending on the date). After reenlisting, she served with several squadrons in 3rd Marine Aircraft Wing, ultimately ending her service with Marine Wing Headquarters Squadron 3 at MCAS Miramar. Molly deployed twice: first from Sep ’04 to Mar ’05 with HQBn 1st MarDiv, at Camp Blue Diamond in Ar Ramadi, Iraq, and then from Mar ’09 to Oct ’09 with HMM-268 in Al Asad, Iraq. She was honorably discharged on 29 Jan 2013.

Molly recently completed two programs at Gavilan College in Gilroy, earning a Certificate of Achievement in Programming for the Internet, and an Associate of Science in Computer Programming. She currently works as a Sales Setter for AncestryProGenealogists just outside of Salt Lake City, Utah.