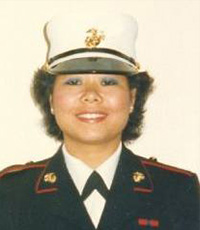 Lily was born on 30 April 1961 in Hong Kong, China. Her family immigrated to the U.S. in 1970 where they made their home in San Francisco, CA. Lily graduated from high school in 1979. After two years of college at San Francisco State University, Lily joined the United States Marine Corps. She attended boot camp in July and graduated with Platoon 11B on September 1981. She was sent to 29 th Palms and attended MOS school as a Communication Center Operator. After MOS school, she was sent to her 1 st duty station with HQBN, First Marine Division, Camp Pendlenton CA. While there, she was involved with an all Women trick drill team and played volleyball. One of her accomplishment was being Marine of the Quarter. Lily left active duty in 1984 and was a reservist until 1985 when she re-enlisted back to active duty. She was stationed with 9 th Comm Battalion where she met her husband who was also a Marine. At 9 th Comm, Lily served as the Battalion Training NCO. She was meritoriously promoted to Sergeant. Lily and her husband were transferred to HQSVCBN, FMFLant, Norfolk VA in 1988. In 1989, Lily changed her MOS to Intelligence Specialist. Lily was discharged in March of 1990 at the rank of Sergeant.

Lily currently lives in San Mateo and works at Kaiser Permanente in Redwood City, CA. She is single and raised two children, a daughter (29) and son (24). She joined CA-3 in 2011.