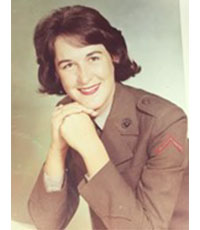 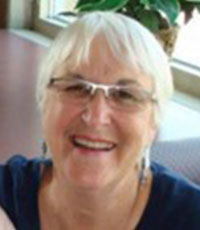 MOS: Originally at Battalion Headquarters as a clerk typist (In a ½ tin can called a “Quonset hut”!) My bosses, SSGT Cary Peeples and SgtMaj William Bean, were very nice to work for.

After, SSgt Peeples saw some of my drawings he arranged a transfer to the Training Aids Library, with a new MOS: 1400 Drafting and Surveying! I worked making signs and lending 16mm projectors, films, and other training materials to fellow Marines. I also trained and then tested them to be sure they knew how to operate the projectors… (I would foul the machines so if they didn’t go through all the steps to correctly set up the machine, it wouldn’t work! LOL)

Memories:I was very proud to be a Woman Marine. Loved the attention I received in uniform, loved living with all the girls in the barracks, loved my job and the people I worked with… I was blessed.

I did well and was promoted quickly, first to PFC and then to LCpl, all within the first year of serving… I wanted to be like LtCol Julia Hamblet, whom I met during Boot Camp and by whom I was so impressed!

The Marine Corps (after Boot!) felt easy to me. No worries about what to wear (uniforms provided!) I had a roof over my head, and the occasional inspections were not a problem.

One small incident stands out in my memory of CamPen. I hadn’t been there long, and was unfamiliar with the critters that roamed the base… One afternoon I noticed a bunch of the girls standing in a circle on the street in front of the barracks. One of them had a broom in her hands and kept swatting at something that was jumping into the air… I approached the girls to better see what they were swatting at… There was a huge Tarantula in the middle of the circle!!! I had no idea Tarantulas could jump!!!