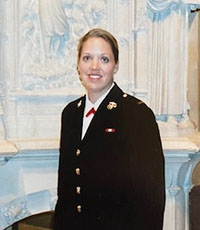 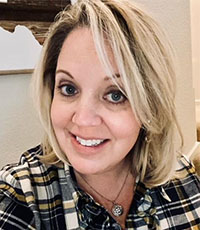 Amy Bernard is currently the Senior Manager, Continuous Improvement at Trinchero Family Estates as part of the Operations Leadership Team. Amy hails from Texas, where upon her retirement from the United States Marine Corps in 2019 she worked for the George W. Bush Institute partnering with veteran support organizations focusing on employment, and higher education for post 9/11 veterans. She is originally from Irving, Texas, and completed an undergraduate degree at Texas A & M University.

While serving as a Logistics Officer in the Marine Corps, Amy was deployed on combat tours to Iraq in 2005 and 2007 in support of Operation Iraqi Freedom and again in 2017 in support of Operation Inherent Resolve. Serving overseas in Okinawa, Japan, Stuttgart, Germany and Wellington, New Zealand, Amy was selected to represent the United States Marine Corps as the first female Officer to attend the New Zealand Defense Force, Command & Staff College, earning a Master of Arts degree in International Security from Massey University. In the spring of 2019, Amy completed her second Master of Arts degree from Concordia University in California.

Amy retired from the Marine Corps, following her assignment as the Executive Officer of Combat Logistics Battalion 5 at Camp Pendleton. She has over 20 years of broad leadership experience, project management, problem-solving and process discipline. Most recently she has been studying and practicing lean leadership and principles as she fills a vital role in helping her current company gain traction in their lean transformation, focusing on leadership and productivity.

Amy is passionate about learning the wine industry and has been awarded Wine Spirits Education & Trust Level 1 and 2 certifications as well as completing a Wine Business Operations course at the Napa Valley Wine Academy. When she isn’t at work and not enjoying a glass of wine, she loves to spend time with her dog Jake, a young Brittany.