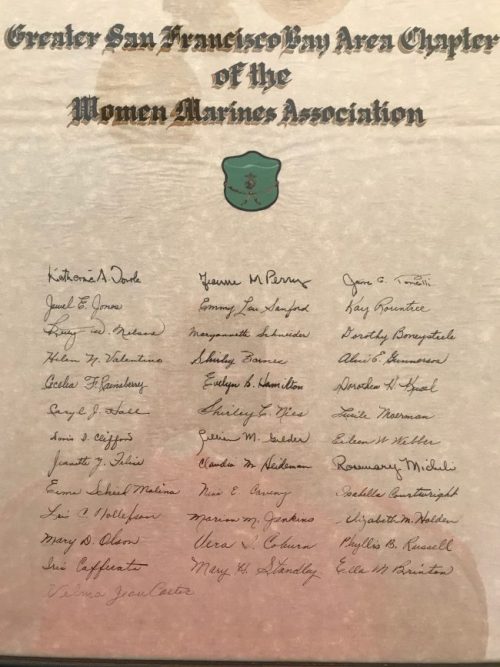 When WMA was first founded in 1964, a large group of Women Marines living in the San Francisco Bay Area and the Sacramento Valley came together to form Chapter CA-3 on June 6, 1964. The chapter was officially chartered on August 6, 1964. Members came from San Francisco, the Bay Area/Peninsula, San Jose, Mount Diablo in Walnut Creek, Sacramento, Redwoods area in Napa, Sutter Butte in Yuba City/Sutter and Delta Sierra in Stockton. Because the members were scattered all across Northern California, it was initially decided that each area would meet monthly and all the areas would meet jointly at least quarterly. All CA-3 and joint meetings were initially held at the Marine’s Memorial Club in San Francisco and later moved to facilities located closer to the geographic area in which the members resided.

Initially, CA-3 met 4 times a year with the most important meeting being the Woman Marine Anniversary in February of each year. Because the members covered a large geographic area, an Executive Committee was formed to represent all the different areas involved. As the membership grew, it was decided that each geographic area would form independent chapters as follows:

Even though our members are aging, many of them still support various community service activities such as volunteering at local hospitals, libraries, family charities and veteran’s organizations. We also support sister Marines/troops serving overseas and at home with care packages, cards and letters. CA-3 members support a variety of local events such as parades, Veteran’s/Memorial Day events, Wreaths Across America, veteran’s memorials, etc. CA-3 is honored to have won back-to-back Broe Awards at the 2008 and 2010 conventions as well as first place awards for Chapter Achievement (2008 & 2010) and History Book (2008/2010/2014). From 2010-2012, CA-3 member Kathleen Wright also served as Area 10 Director and as National 1st Vice President from 2014-2016. CA-3 looks forward to many more years supporting WMA and our sister Marines.